We travel for about 3 hrs north of Tbilisi on the Georgian Military Highway, our destination is a village called Kazbegi. It is famous for its mountainous scenery and the Gergeti Trinity Church, which is situated at about 2,200 m with Mount Kazbek in the background.

We stay at one of the guesthouses which serve delicious homemade food. In the evening I take a walk around the village and to my surprise notice that most farm animals are allowed to roam around freely in the village while only some are taken back to their sheds by farmers.

In the evening the sun makes one final appearance from behind the clouds, tinting the mountains yellow and orange, which makes for a spectacular sight.

The following day I go hiking towards the North Ossetian border on the main road which runs alongside a beautiful river. I want to avoid the traffic and a long dark tunnel ahead of me, so I decide to take the road left to the tunnel that leads up to a village on a hill. As it turns out, the road is long and winding and not the short bypass I had hoped for. I finally reach the village Tsdo, which consists of only 10 houses and about the same number of graves. I am welcomed by the fierce barking of a large white Caucasian dog who comes my way. However the „beast“ is wagging its tail…

A big man emerges from his house saying hello. He tells me that the dog who I’ve made friends with in a matter of seconds is not dangerous but stupid. „You can have him if you like.“ “Stupid Dog”, apparently smart enough to understand what is being said about him, decides to follow me for the next three hours, two of which I spend desperately struggling through high grass and bushland, trying to get down to the road again. I act on the man’s advice (“The grass is pretty high but you can continue that way”.) The dog keeps following me. As I do my best to make my way through the high grass, for a moment I foolishly believe that the dog is leading the way when he suddelnly takes a different turn, but that’s not the case. Instead, Stupid Dog comes back and jumps right on top of me when I – completely exhausted from my fight with the bushland – decide to sit down and take a rest. He also goes for the little food I have in my backpack as soon as I take it off. That dog is clearly no help at all.

Instead Stupid Dog keeps following me back to the village and beyond. Two hours later I again run into his owner, telling him that there is no chance of getting through the bushland. He then suggests “If you want to avoid the dark hole you better take the old road which runs to the right of the tunnel”. Thanks for telling me that after getting cut by all the grass.

When I leave the village Stupid Dog is till trailing me, sniffing at whatever there is to sniff at for a stupid dog. Whenever it seems that he has finally run back to his village I spot him out of the corner of my eye yet again. I finally get back to the main road, cross it and take the old disused road. My hopes of finally getting rid of the dog are dashed when I see him cross the road too… Stupid Dog catches up with me, ambling around, back on the busy main road.When I pass a rest area thank God a heap of rubbish catches his attention and he finally forgets about me.

The Marshrutka (mini-bus) which we take from Tbilisi to Batumi suddenly slows down after one hour. The bus driver stops for no apparent reason and makes a call on his mobile. Driving VERY slowly for another hour, we finally come to a stop in a village. The short stop extends into a two hour wait during which the bus is repaired at a former petrol station.

On the way back from Batumi to Tbilisi our train calls at a station and does not move for at least one hour. I step off the train and have a look around. On the platform an old man addresses me in Russian. My Russian vocabulary comprises about 10 words which I picked up learning Czech 20 years ago, so I can’t really make out what he is trying to tell me.

The man however guides me out of the train station into a bar across the street, treating me to cheese and a big glass of Schnaps and it is only 9 o’clock in the morning! Only old men sit in the bar drinking at this time of the day. When I signal him that I can’t finish my glass of Schnaps, he poors half of it into his glass and downs it straight away. He then walks me back to the train station, where I take this picture of him.. 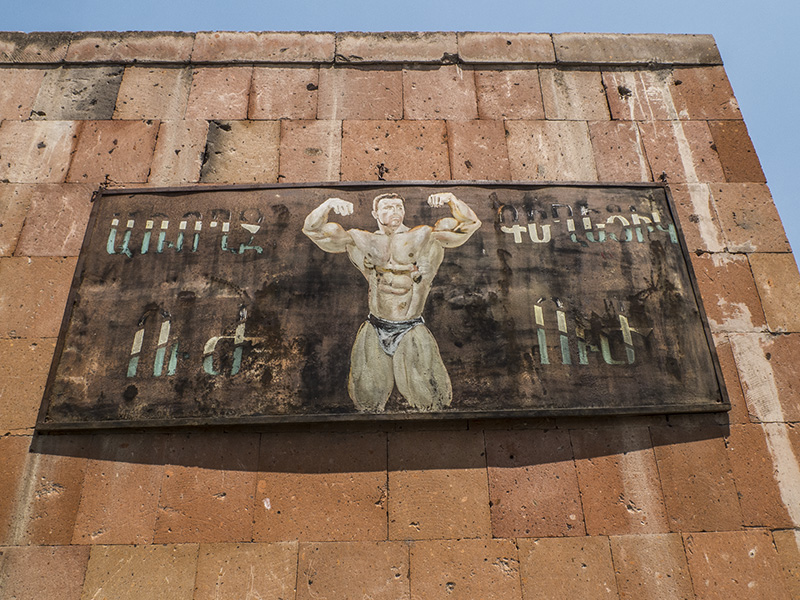 Arriving early in the morning in Yerevan, we take a taxi to our hostel. The wide and empy streets are lined with tuff houses, which gives them a “Soviet” feel. Their reddish brown tones make large parts of the city look rather uniform.

Echmiadzin is a about one hour from Yerevan. We go there by car to visit a famous monastery but what attracts my attention more is a disused open air swimming pool.

Lake Sevan, which is the biggest lake in the Caucasus region, is situated at 2.000 m above sea level. Being the main recreational spot in Armenia, it attracts a large number of people from ordinary folk to the president of the Republic, who owns a villa in a secluded spot. On the same peninsula there is also the former recreational home of the writers’ union which is a perfect embodiment of the now retro-futuristic idea of the communist society.

Situated on a high plain, the lake has a distinctly Alpine athmosphere. The same day that we want to escape the heat in Yerevan (around 38 degrees), heavy clouds appear around the lake and temperatures drop to 15 degrees Celsius. 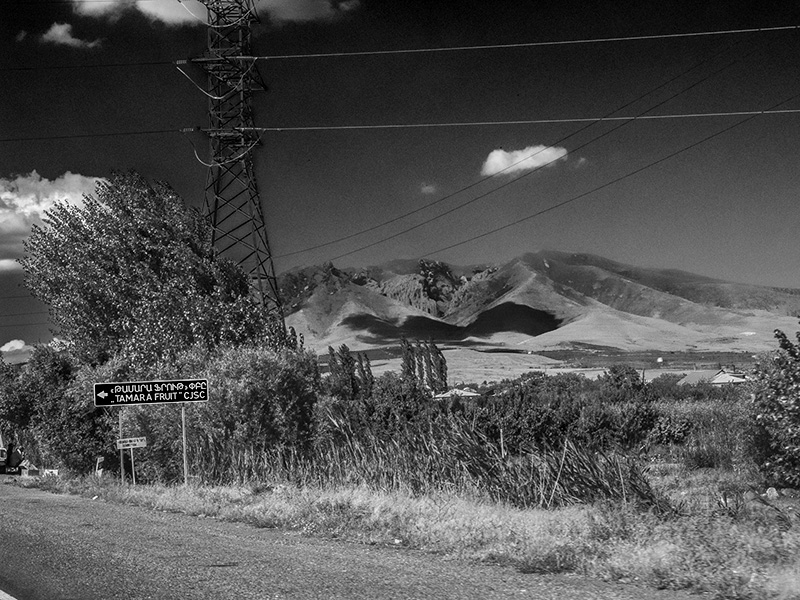 The landscape around Yerevan, which, for the exception of Mount Ararat in the distance, is dull and dry, changes considerably when we reach a high plain. The scenery opens up to grasslands and green mountains. The cab driver, seemingly in a good mood, speeds up his car considerably.