After a two hour drive there appears to be a problem with the car. Most Armenian cars run both on gas and on gasoline. Our car is driven by gas, which makes it difficult to push-start when it stalls. During the ride our car stalls three times and we have to push it several times until it starts working again.

We are very lucky that each time the car stops, we happen to be on a downward slope. It still proves difficult to get the car going each time. Once, the driver fumbles around witha cable which runs down from the cab sign on the roof along the side of the front shield into the hood to the battery. He reconnects the cable in a different way and magically the car starts again.

Inbetween our forced stops we drive through beautiful scenery full of mountains and rivers, passing the train line leading to Tbilisi. The Lori Province is dotted with factories, some deserted, others still in use. Some factories are so large that they seem like entire cities. We pass cement and copper factories which blow dense smoke out of their chimneys. Smoke coming out of mountain tops just looks surreal.

After a two and a half week trip I leave Tbilisi at 5 am. Up in the air, the Caucasus mountains seem to say good-bye as the mountain range rises out of the clouds. Below, it must still be dark…

I am invited to hold a video workshop in Tehran and fly to Iran in summer 2012. Travelling for the first time to the Middle East and especially to Iran, I was very curious about that country. The only picture of Iran which you get in the West is very negative due to restricted media coverage that highlights just the political conflict with Israel and the U.S.
I have a connecting flight from Dubai to Iran and when I get on the plane I am surprised about the mixed crowd on the way to Tehran and about the downbeat lounge music on the speaker system, but it’s an Emirates flight after all… 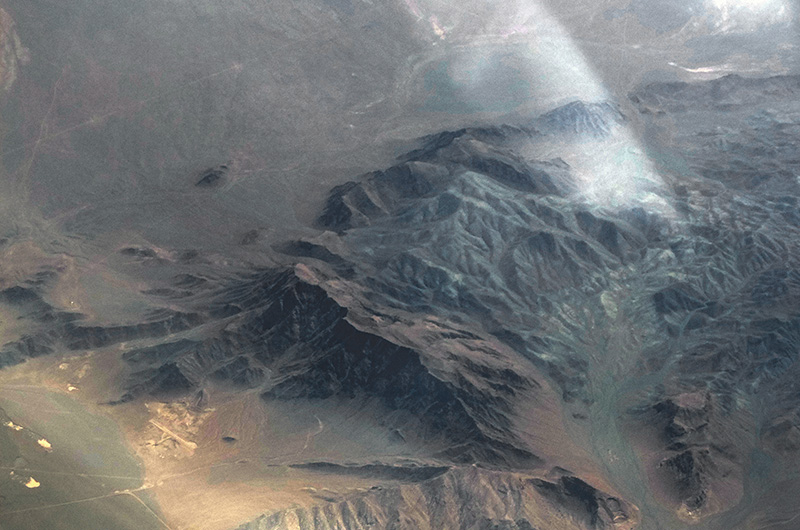 The Imam Khomeini Airport is one hour from the city center of Tehran. On the way to the center I pass the huge Khomeini Shrine which is being completed at the time. The building is monumental, its size compares only to huge shopping centers in the West. Religious palaces versus cathedrals of consumerism could be the underlying notion here. The mayor of Tehran is building a large number of mosques all over the city and puts himself in a good position to succeed Achmadinejad as the new president in this year’s election. Some people in Tehran hope for a change and go along with his aspirations. 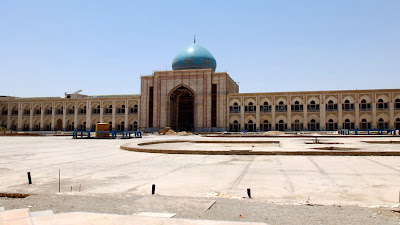 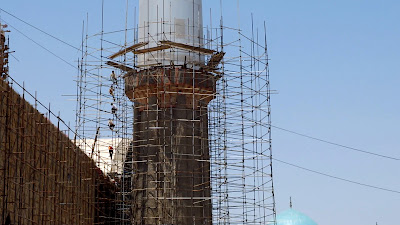 In the city centre I pass a site called Mossala on which a huge mosque, two minarets and exhibition halls are being erected. The place has been under construction for 23 years, as I get told later. The two minarets are said to be the highest in the world. The whole site is extremely impressive due to its monumental size and its architectural details.

Watching the carcass of the mosque’s dome I can’t help myself but think of a nuclear reactor. That’s how much the Western media shapes my perception but it’s also du to the fact that in the West we do not have a large number of concrete domes. You’ll rather find those in former Eastern Block countries were they were built during communist times.

People in Iran are generally very friendly and hospitable and also curious about foreigners. The participants of my workshop are highly interested in my films and in Western culture in general. One student has a great knowledge of film history. He seems to have watched all relevant films while I missed one or the other. The guy on the bottom is not him, by the way…

In the north of Tehran towers a mountain called Tochal which is part of the Alborz mountain range. It has an altitude of roughly 4.000 m and can be seen from almost everywhere in the city. During most part of the year the peak is covered with snow. 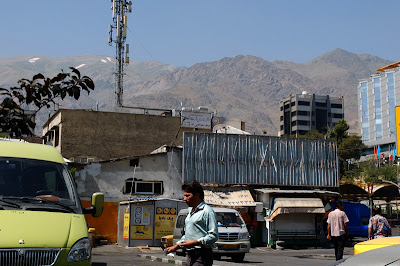 The Alborz mountains stretch over a huge distance from the borders of Armenia and Turkey in the Nortwest to Turkmenistan and Afghanistan in the Northeast.

I make friends easily at the workshop and one of them takes me in his car on a trip to the Caspian Sea. On our way to the sea we cross the Alborz mountains which are desertic in the south and get greener and greener on our way north. The landscape is extremely beautiful and fascinating. 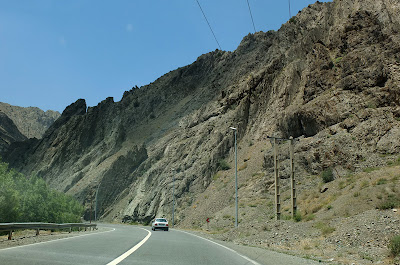 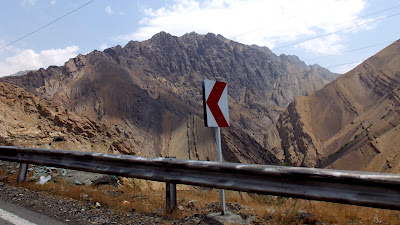 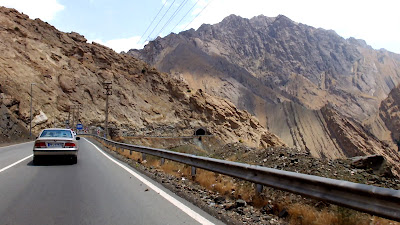 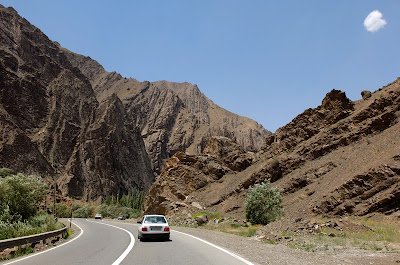 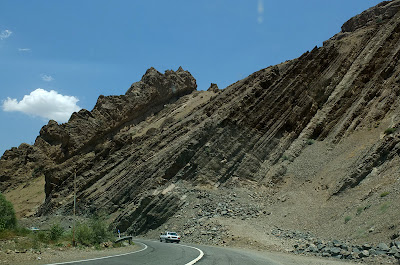 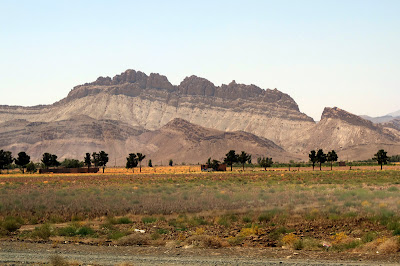 A few days after our trip to the Caspian sea we head south of Tehran to a historic town called Kashan. At my arrival temperatures in Tehran reached 32°C but it has gotten hotter constantly over the last week. The city has turned into an oven with heavy air pollution due to massive car traffic and probably a rather poor quality of gasoline. 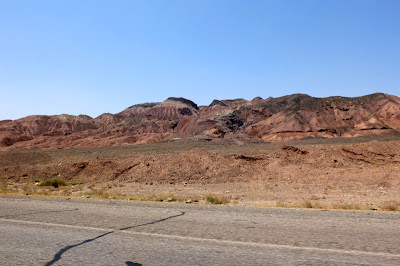 We drive through the desert which is omnipresent and must cover a big part of Iran’s terrain. We reach our destination around 2 pm and the heat hits us with full force when we get out of the car. I guess we witness temperatures of around 45°C. A friend runs for several bottles of water which we empty in a minute. 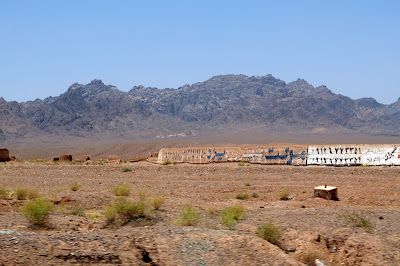 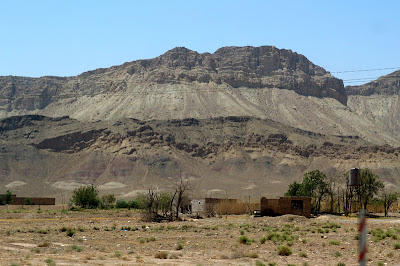 The heat is unbearable at first but eases down in the afternoon when we visit historic houses with natural ventilation systems (whithout any A/Cs, that is). Iran has a rich culture which you find in historic sites, in its food and at bazaars. 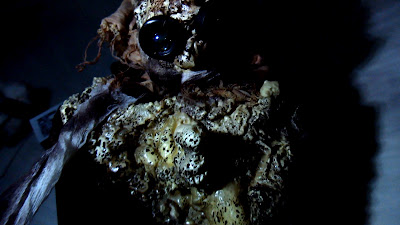 Back in Tehran we go to visit an exhibition at the Iranian Artists’ Forum which could also be shown in a western museum. The show is set in the dark, it consists of puppets assembled from trash which are mounted on the walls. The creatures look eerie and funny at the same time. The athmosphere somehow reminds me of war. 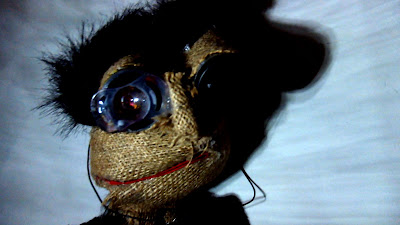 My latest short film is screened at the Int. Short Film Festival Sao Paulo and finally I make my first trip to Brazil in late summer 2012. Rio de Janeiro has been on my travel list for a very long time and I spend 10 days there before continuing my trip to Sao Paulo. I rent a room in a pleasant B&B in Santa Teresa with a nice terrace looking over the district of Lapa and the bay of Guanabara. 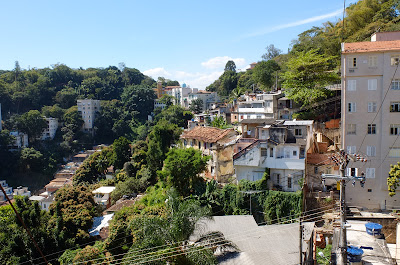 On weekends Lapa turns into a single party ground with musicians and dancers in the streets, innumerable bars and thousands of people partying through the night until sunrise. I do not get much sleep and once, when I go to bed earlier a rooster wakes me up at 5 a.m. In a city of around 10 million people I tend to find that a bit absurd. I even find that fucker in the street the next day but do not kill him as intended. 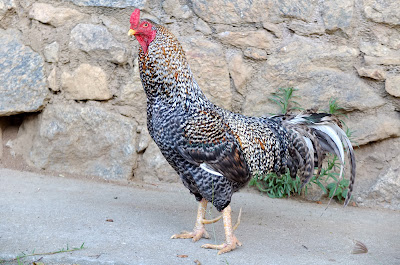 Like all tourists I also visit the sugar loaf and the Corcovado with the statue of Jesus. Only there I finally get a grip on the topography of Rio and understand how the city is built and structured. 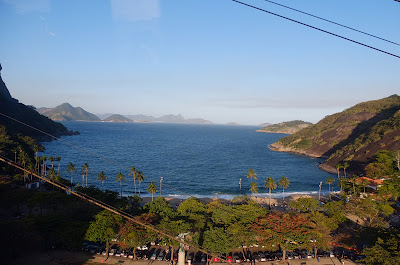 Travelling through Rio by bus, circumventing innumerable mountains covered with jungle or favelas, it is hard to make out the terrain. The topography of Rio must rank as one of the most beautiful in the world with its green mountains, the Atlantic coast, a huge bay and even a lagoon which is handily placed in the interior behind Ipanema and its famous beach. 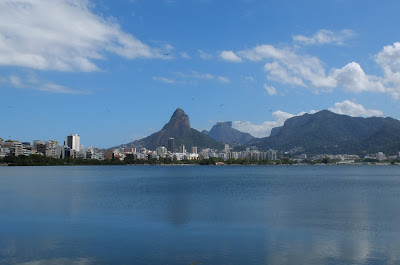 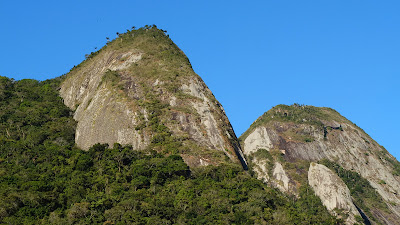 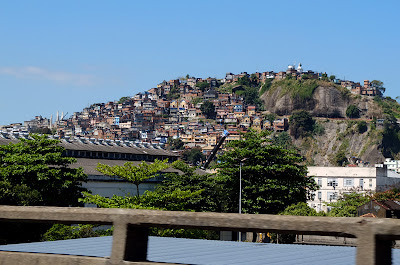 The favelas in Rio de Janeiro look quite spectacular. They are like rivers or glaciers running down from innumberable mountains in and around the city.

Many examples of great modernist architecture can be found in Brazilian cities. The MAM (Museum of Modern Art Rio, completed in 1955) is a typical example from the 1950ies. The main body of the building rests on concrete v-slabs which dwarf people who cross underneath.

Across the Guanabara bay facing Rio lies the great Museum of Contemporary Art Niteroí built by Oscar Niemeyer (completed in 1996).

Another fine example of Niemeyer’ architecture is the Nogueira Garcez Pavilion in Parque Iberapuera in Sao Paulo (last picture).

The Metropolitan Cathedral of Rio looks like a mix of a Mayan temple and a waste incineration plant. 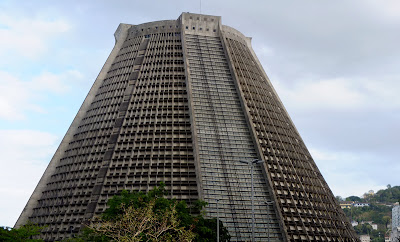 Charging the entrance at ground level one could also mistake it for a drive-through church. Certainly the strangest “house of god” I’ve ever seen….
Pages:   ←123456→ ... 17