Hillbrow is a notorious district of Jozi, which, as the names indicates lies on a hill overlooking Joburg’s Central Business District (in short CBD). There is a TV-tower right in the middle of the district which appears in Jozi’s 2010 emblem.

Hillbrow, now close to being an urban slum, was a whites-only residential area that was fled by its inhabitants in the 1980ies as more underprivileged people moved in. Due to poor investment major buildings decayed and the district was labelled a no-go area affected by poverty and crime.

There are some high-rise buildings in Hillbrow which are in a pretty bad condition. Some of the buildings have most of their windows smashed and some have partly black facades due to fires. 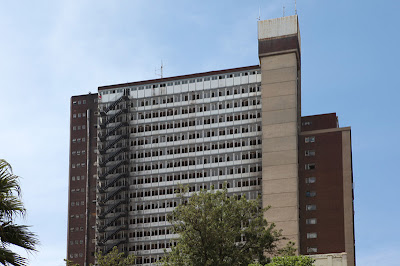 The three of us are fascinated by the area, so we visit Hillbrow several times, once even for (cheap) shopping. The place has its own charm.